Mark isn't usually wrong. Even when he is, he speaks with such authority that sometimes you change your opinion because if he's talking like that, how can he not be right?

I called him out for spelling Chick-fil-a wrong on his Facebook profile (thanks, social media!) and he tried to call me out for being wrong, saying "no, it's Chik-fil-a" 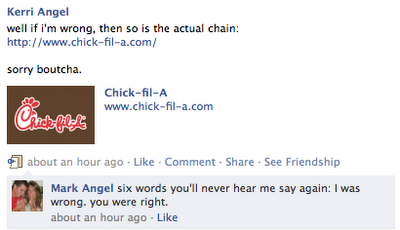 That's right. "Six words you'll never hear me say again: I was wrong. you were right."

I may not have heard the words in the first place since everything happened in writing.

But now I have this proof FOREVER.

Filed under being right, brothers, Chick-Fil-A