I love DePauw. Absolutely love it and I wouldn't change my college experience for anything in the world, but I can say DePauw football games are essentially glorified high school games. I say this not wanting to take away from any of the talent on the field or how much fun I had at any of the games.

However, this past weekend, I experienced some true college football.


Ohio State vs Nebraska
The 100th anniversary of OSU Homecoming

It was seriously one of the coolest experiences I've ever had...mainly because I kept asking myself, "This is real life?" and "How do students do this every Saturday in the fall?" Every Saturday!

Let me begin with the tailgating experience. We got to be all VIP (thanks to Mike's friend's brother) and were graciously invited to The Fan 97.1's tailgate. And let me tell you, that tailgate knew what it was doing. Not only was there a Jeep with a TV which just magically appeared in the backseat, but also its very own PORT-A-POTTY (insert: "you know you've made it when..." here).

Never have I seen so much college-themed paraphernalia in my life. Pashminas, golf shoes, earrings. You name it and it was covered in Buckeye. Was it all necessary? You can bet the owners of said paraphernalia would not hesitate with their "duh, yes" answers.

So apparently in Columbus, instead of being predictable and calling this what it was - a pep rally - they call it a "Skull Session." I have no idea why - maybe because the marching band is so loud in your skull? Seems like a stretch, but I'll buy it because it was pretty darn neat. Hearing Urban Meyer give a little pep talk, seeing the whole team suited up and watching the most fascinating Men's Glee Club leader in the history of Men's Glee Clubs. Not to mention we sweet-talked our way into sitting pretty in row 1. I've never been impressed by a marching band more. Or so I thought, little did I know what half-time would bring...


View of The Ohio Stadium. Who knew we helped set an attendance record? Go & brush yo' shoulders off. 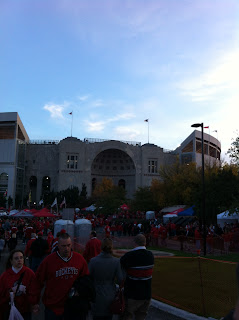 These two people had zero clue thirteen touchdowns were about to happen in the game. 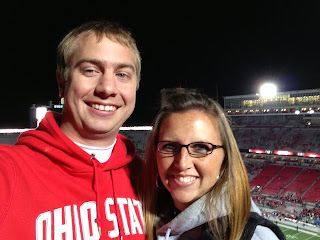 I had no idea this game would be such a learning experience. What you see below is called "Script Ohio" and it's just about the craziest thing humans can do. All those band members are in motion, weaving in and out of each other to write Ohio in cursive and not run into each other. How do they do it? We'll never know. Oh yeah and can you see those bodies on the 20 yard line? The Nebraska kicker turned out to be a real jerk and came onto the field to practice while the band was still performing. The nerve! Go back to Nebraska, you Cornhusker! 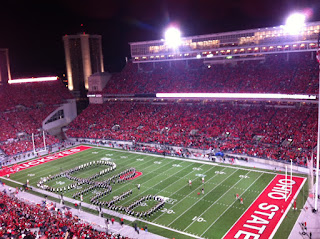 Mike's phone is fancier than mine (waaah waaah)...so behold the sweet panoramic shot he captured:

Then I pretty much owned Ohio Stadium. Typical, right? Actually, no, not really at all. It was the Buckeyes who owned the Cornhuskers: 63 - 38. A real defensive battle. 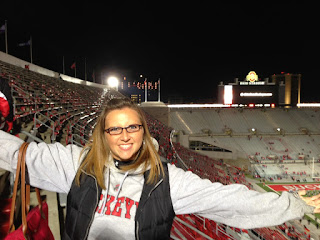 Before heading back to the lovely city of Chicago on Sunday morning, we made a few pit stops around campus (it was my first time after all) and got a sneak peek at a real Heisman Trophy! Not only do I now know who Archie Griffin is, I also have seen one of his trophies. Super cool, but the plaque was much more generic than I was anticipating: "Outstanding College Football Player in the United States." Guess beggars can't be choosers. 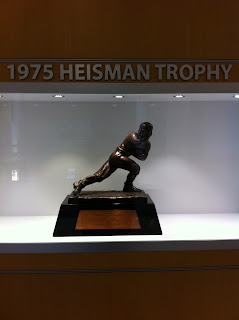 Moral of the story: I found out I have been spelling Ohio correctly all my life - as confirmed by the constant cheers during the game. I totally get the hoopla around Ohio State football and I'm on board - Buckeye bouncin' all the way. Their marching band is pretty much the greatest. And I just love football, regardless of who plays.

In case you're interested, here's the halftime show. Prepare to have your socks blown off:

Notre Dame tailgates are way better. So is their band. BOO to OSU! Don't get sucked into the hype, KPA. Don't do it.