a nod to my brothers

So apparently National Siblings Day was yesterday? What? Since when is that a thing? Does someone just declare "LET US CELEBRATE SIBLINGS TODAY" and we, the lemmings we are, just follow suit and say "OKAY"?

My siblings are pretty phenomenal:

Mark, being all smart and stuff, got initated into some honors program I had to Google to know what it meant (Phi Beta Kappa). But it's a pretty big deal so therefore, he's a pretty big deal. Although he already was in my mind. After all, what kid who says stuff like "I just had this innate feeling we were going west...like I felt the Pacific pulling me, ya know?" wouldn't impress you?

Then there's Richard. He played some baseball in college. He was pretty good at it and he was fun to watch. He made the All Decade Team a few years ago and now he's getting a shout out with a "Where are they now?" Who would have thunk? The best part is his favorite record is "IWU career leader in ... HBP (aka hit by pitch) (36)." Now that's something to be proud of. Too bad they didn't ask to quote me. I have some items which would have lead to a fun read for the readers. i.e. he didn't realize orange was a color in the rainbow. This is a fact as of last Fall.

Neither of them will ever choose to brag about these things so that's where I, being the wiser older sister, come in!

Thanks, boys, for putting up with me and keeping things interesting! Let's keep this streak going. 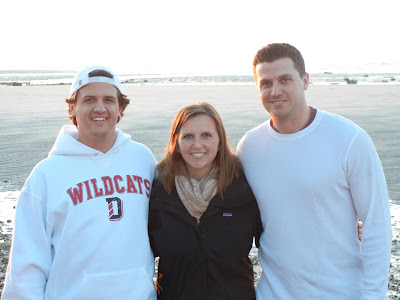