Little did I know when I snagged tickets to the Sunday night Cubs/Sox game three at Wrigley, it would turn into real history. I was too busy making history of my own just by being in attendance and feeling like a kid on Christmas morning, sporting my DeRosa jersey proudly.

Since the Blackhawks managed to win the Stanley Cup, Sunday night was the celebratory night at the Friendly Confines and we were lucky enough to witness. It was nothing short of awesome. 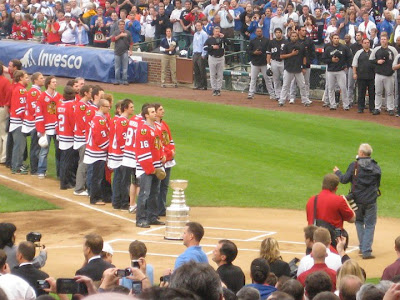 It was pretty cool to watch both pitchers throwing no hitters through seven...it's one of those "hold up - this game's going too fast - oh wait, no hits" moments (you know, the kind that doesn't happen often). Naturally, in the top of 9, I said out loud, "I can't believe Lilly has a no hitter going" and next up: Juan Pierre with the single down the middle. I'm not one for jinxes though.

Still, the Cubbies managed to clip one from the Bad Guys and that's better than none. 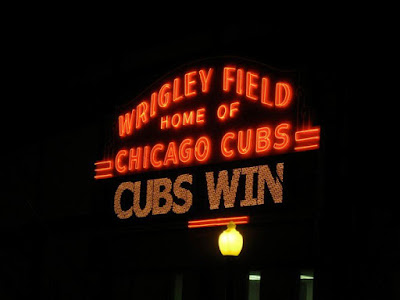 (What you don't know about this picture:
It took two people and five attempts to get it right. That's perseverance for ya.)