I have a lotion obsession. I like having smooth hands (stop judging me and start commending me for admitting something not many people would admit outloud) and especially when battling the wicked dry winters in Chicago, it's pretty darn important to keep one's fingers and palms properly lotioned.

Over the summer, Tina introduced me to some awesome stuff from Victoria's Secret called Flirty Peony & Waterlily. I let some coworkers borrow it a few weeks ago and I'm glad they made me say the name outloud because I totally butchered the word peony. As it turns out, pee-ONY (pronouncing the "ony" as in pepperoni) is not the proper pronunciation. As much as I'm not a fan of the word "flirty" so much, I'm a fan of the lotion.

While in New Hampshire, my mom and I were poking around this store of trinkets and wonders next to the restaurant we were waiting to eat. Always one to test out the testers, we dove into Olivina's Honeysuckle Rose and really haven't looked back. Sorry boutcha, Vicky's lotion! 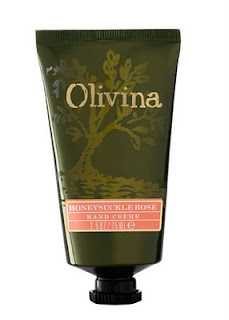 I wish I could add a link to the scent of this lotion because it's seriously awesome. It's strong enough to smell fresh, but not so strong that people don't want to be around you. (Or maybe you have other issues - we're not judging here).

It's expensive stuff but trust me when I say it's so worth it and your hands will thank you.

I am a bazillion percent sure we're related. I adore good hand lotion.